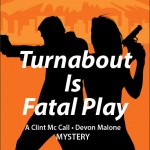 An action scene from Turnabout is Fatal Play, the first of the McCall-Malone mysteries. A quick brawl ensues when three young men attempt to take on Clint McCall, Devon Malone, and Reuben Keys — without much success:

By this time, Reuben was closing with us, grinning in recognition. “Hey, Reuben,” I said loudly as I pointed over his shoulder, “are those guys with you?”

He glanced back and lost the grin, then took the last few steps to join us as the other three stopped about fifteen feet away. Now they were three abreast, glaring at us in unison, a solid wall of meat across the sidewalk.

“They’re not with me,” he said. “Looks like they want to be with you.”

“What are you doing here?” Malone asked him belligerently.

“Why don’t we worry about that after we find out what they’re doing here?” I responded, indicating the three punks—all of whom, it struck me, looked remarkably like Gunther Junior. Very stocky, over-muscled, short-cropped hair, wearing jeans and tee shirts with no jackets despite the cold wind. Tough guys.

Malone gave them a long look and must have noticed the similarity as well. “Could he possibly be that stupid?” she inquired of no one in particular.

They started toward us, moving fast.

“I’d say that’s a yes,” I told her as my adrenaline level headed skyward and I took a step sideways to give myself some room.

Malone stepped the other way and Reuben stood still in the center of the sidewalk for a second, probably contemplating fight or flight. “Well, shit,” he muttered, “I wasn’t lookin’ for this.” He settled in.

These three guys were all a good decade younger than the youngest of us, had at least forty pounds on the heaviest of us, and looked like veteran brawlers. I could see from their grim faces that they had complete confidence.

I mean, why not? They were about to attack a small woman, a medium-sized black guy dressed head to toe in lime green, and an average-looking fellow in his fifties. They must have been thinking it would be a cakewalk.

Of course, any one of the three of us—I was pretty sure Reuben was carrying as well—could have pulled an Indiana Jones and simply shot them all, but that wouldn’t have been any fun. And apparently they were too dumb to even think of the possibility. They just came right on, bare-handed and ham-fisted.

They were about four feet away when we made our moves. I executed a straightforward heel kick to my guy’s chin. Out of the corner of my eye I saw Malone do a fancy spinning side kick to her guy’s throat. Reuben, who had never bothered with formal martial arts training, simply kicked his guy in the nuts. My guy went down like an axed redwood, Malone’s staggered into the side of the Transit building holding his throat and gasping, while Reuben’s dropped to his knees and screamed.

My main concern was about the guy slowly sinking into a sitting position against the building. I looked at Malone, who wasn’t even breathing hard. (I was.) “You didn’t crush his larynx, did you?”

She shook her head. “No, I pulled it. He’s not going to be giving the luncheon speech at Rotary any time soon, but he’ll live.”