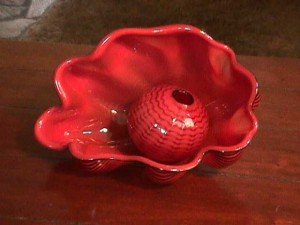 Dale Chihuly is a world-famous Seattle-area glass artist even though, since an accident in 1979, he has had others doing the actual glass-blowing. He’s been quoted as saying that his role is “more choreographer than dancer, more supervisor than participant, more director than actor.” Whatever his role, his vision has been wildly successful with many millions in sales of his work, television documentaries and books focusing on both the man and his art, and of course critical acclaim.

Another thing: His pieces are incredibly expensive.

Which makes it a wonder indeed that a gallery featuring his work would even try to succeed in a small town like Hood River, Oregon.

Situated just about in the center of the Columbia Gorge National Scenic Area, at the foot of Mount Hood, surrounded by fields, orchards and vineyards, Hood River has a population of around 7,500. Its economy has in recent decades been based on three industries: agriculture, tourism, and sports recreation, but since the latest turn of the century, high-tech industries have become the largest employer. This Chihuly gallery pre-dated the high-tech influx, however, making even more mysterious the reason a young couple of art lovers decided such a spendy operation might succeed here.

Spoiler alert: It didn’t. The downtown storefront they occupied was again vacant before a year had passed.

During the months it was open, however, I must have dropped by at least once a week, just to gawk and dream and probably drool occasionally.

I’d been in love with Chihuly’s work since I first saw photos of it many years before. The opening of the Hood River gallery was my first chance to be in its presence, to see the glint of light on the different colors and shapes, to appreciate the magic first hand, and I couldn’t get enough.

Another thing I couldn’t do was buy one of the damned things. The least expensive piece in the gallery was ten thousand dollars.

So I just visited. A lot. Got to know the owners by their first names, though I don’t remember now what they were. We talked frequently about Chihuly’s work and the different pieces they had on display, though I’m sure they quickly understood that I was a browser only. Usually I was also the only person in the place besides them.

And it came to pass, finally, perhaps only after they realized there would never be enough persons in the place, that they took pity on me. One day they told me they had several much smaller pieces at home, pieces of their own, that they would be willing to bring in for me to look at. If I wanted (could afford) one of those, they’d be willing to part with it.

I replied that I’d be happy to look—which should have pretty obvious by then, anyway.

A couple of days later I came back as arranged and they had two small “sea forms” displayed for me to examine, one red and one blue. Of course I wanted them. I particularly fell in love with the red one…but then I had to ask, how much?

Let’s just say it was significantly less than half the price of anything they’d been displaying up until then. We can also safely say that, for me at that time, it was still an insane amount of money to spend on an artwork. Nevertheless, I had to have the red one.

That same afternoon I pretty much emptied my bank and savings accounts to buy the Chihuly. Within a month the gallery was gone. I still have the Chihuly, though, and I’ve never regretted it for a moment. The magic will always be right here in my living room.