But there aren’t that many detective thriller series with ongoing feline characters. 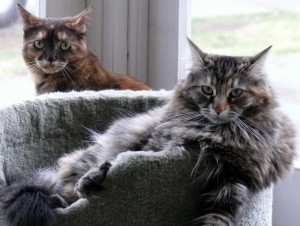 Really, there aren’t. A few, perhaps, but not many.

The McCall-Malone Mystery series has sisters Stella and Maxine, who exist both within and without the novels. Since they are the same in both worlds, I will tell you about the “real” Stella and Maxine. (As pictured, Stella on the left and Maxine on the right.)

First of all, an encomium: Adopting these two cats from their Hood River Cat Rescue foster home was the single best decision I’ve made about my retirement. They are excellent company for an old bachelor writer who would otherwise be mostly alone.

And now for an anecdote or two (sorry, no cartoons):

Stella is really into reaching out and touching. The adoption deal was sealed when she was first put into my arms and she immediately looked up at me, reached out a paw, and placed it carefully against my cheek. I’m standing there thinking, “I’m toast. Where are the papers to sign?”

I’d always been a one-cat guy, but there were only the two sisters left from this rescued litter and I was persuaded to take Maxine as well. I learned very quickly that two cats are indeed better than one. Not only do they keep each other entertained but they make a better blanket when they’re both on your lap.

Maxine, in contrast to her sister, is not a people-cat. No one who’s visited my home has ever seen her—voluntarily on her part, at least. She always manages to disappear into the closet about ten minutes before guests arrive. Not sure how she does that. A couple of times early on I got her out of the closet to show to friends, but I don’t do that anymore. It took her about a week to forgive me each time and it’s not worth it.

Anyway, in recompense for all they’ve added to my life these past seven years, I’m letting them live with Clint McCall as well as with me. Rest assured that everything they do in his house they have also done in mine. May my readers enjoy them half as much as I have.

One Response to “Stella and Maxine – Ongoing Characters For Sure”