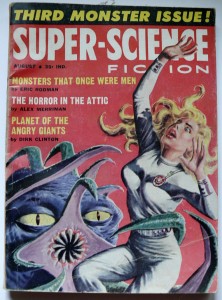 It might seem odd that I post vintage science fiction magazine and book cover art on my Facebook author page (see link above) rather than the vintage art from detective magazines and novels. I write detective novels, after all, not science fiction.

The thing is, I first decided that I was a writer (as opposed to someone who sometimes wrote) when I was a 14-year-old freshman in high school and couldn’t spend enough time on the brand new Remington typewriter that my parents had purchased for me. I loved that machine, the smell of the ink on the ribbon, the impact of my fingertips on the keys leaving those letters and words on the page. It was magical.

And back then, to me, science fiction was equally magical. This was about fifty years ago, mind you, the days of “hard” science fiction: rickety rocket ships and horrific space monsters and sinister robots, not to mention damsels in distress, pulp fiction and gloriously trashy magazines in their heyday (as witnessed by the illustration here). Thus the collection I have now of those old covers.

My first short story was about a teenager who stowed away on a spaceship. Maybe a thousand words. I actually sent it off to one of the pulp magazines. It was quickly rejected, quite understandable in retrospect given the simple-minded plot, terrible science, and total lack of believable characterization. I churned out a few more equally inept stories and then gave it up for about thirty years, doing a lot of writing for newspapers and for various other jobs but keeping my distance from the fiction I dreamed of producing.

Also during those decades science fiction changed and I changed. I watched with regret as the rocket ships were abandoned and the monsters replaced and the robots given rules, as space opera was superseded by sword and sorcery that just didn’t do it for me in the same way. Meanwhile I found myself fascinated by the dangers and mysteries of the real life surrounding me.

So I ended up a mystery buff rather than a science fiction fan. By then it was too late to collect the gloriously trashy covers of the pulp detective magazines and novels, but not too late to write modern versions of their stories. I still like tough guys who carry the day and get the girl in the end, even if the day can get very complicated, the “girl” is a woman just as tough as the guy, and it takes more than a few books to win her over.

Maybe someday the covers of my books will be the vintage art in someone’s collection. That would be damned cool.