Obesity resulting from the massive consumption of junk food and sugar is a huge problem in this country. Thus the ubiquity of diets.

Weight Watchers, the cookie diet, the baby food diet, the macrobiotic diet, the apple cider vinegar diet, the Mayo Clinic diet…and hundreds, maybe thousands, more, ranging from the sane and sensible to the wild and wacky (and dangerous).

The Body Mass Index (BMI) is defined as your body mass divided by the square of your height.  It’s meant to be used as a simple means of classifying populations with an average body composition and shouldn’t be taken as seriously as many people now take it. It tends to run high for tall or particularly muscular individuals, for instance, and is applied differently for children. It can, however, give you a general idea of where you stand in relation to our current ideals of good health.

Let’s get exercise out of the way first (always a good idea). For the last thirty years I’ve averaged an hour or more a day of vigorous exercise. Taekwondo. Tai chi. Treadmill. Hiking. Racquetball. Weight machines. All that and more at various times.

No running. Sprinting from one end of a racquetball court to the other has always been my limit on running. I hate running.

Anyway…suffice it to say that my weight loss this year was not because of increased exercise.

And I have lost weight: a little more than twenty pounds since January 1. How did I do it? Not with the apple cider vinegar diet, you can be sure, or any organized diet plan in fact. I simply ate a little less. Of everything. Other than giving up a very few extraordinarily high calorie junk foods, I didn’t change the content of my diet at all; I simply reduced the amount of food eaten.

Why is it an “OCD” diet? Because I’m human and I have great skill at kidding myself. Consistently eating less, at least for me, requires some careful record keeping to avoid fooling myself. That “little extra snack” that you conveniently forget you had earlier today can make all the difference. So I use an on-line calorie/exercise counter to keep track. It helps to have mild obsessive-compulsive disorder.

My current BMI is a little under 27 and to reach the top of the ideal healthy range I’d have to lose about ten more pounds. I may not go quite that far. Tall I’m not, but I do like to think of myself as muscular.

We’ll see how it goes next year. 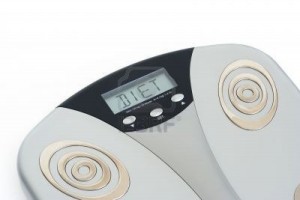